Owner Dave Faulk (right) visited with Kirk Hardcastle (fisherman and marine biologists)  as they discussed the sustainability and fishing techniques used on the fishing grounds on the Taku River Inlet near Juneau Alaska where Dave buys all his salmon. 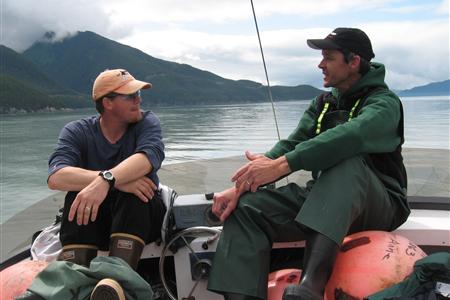 Born to a large animal veterinarian, Dave Faulk, founder of the Porterhouse Market, had little choice but to grow up around livestock.  He could remember going to the sale yards with his dad to take blood samples of cattle and to check their health before transport.  Some of his best memories were growing up on a small beef ranch in Northern Idaho where they raised Simmental cattle.  His dad liked to keep the boys busy because next he bought a dairy farm in Eastern Oregon where Dave learned to appreciate fresh milk and was able to gulp it down by the gallon as a teenager.  Strong bones for bucking hay, irrigating pastures and getting up early to do chores before school.  Life couldn't have been any healthier than growing up in the country and working hard, it also left him with an appreciation for where food comes from and the dedication behind it.

Living in Eagle his senior year in high school he took on a part time job at the local packing house that used to sit on the banks of the Boise river right where the Porterhouse Market is today.  Once again he found myself in the food industry where he learned to butcher and the art of sausage making.  When the plant closed its doors after nearly a century, he took an opportunity to head for the fishing grounds on Kodiak Island Alaska, still more food!

This time it was a whole new game though, harvesting was under water, not on the soil.  He worked for two summers fishing for Halibut, salmon and Dungeness crabs.  Now he really had an appreciation for hard work and long hours.  Along with it however came a new love for fresh seafood.  As a kid he had grown up on very little seafood and certainly none that was this fresh!  Finally he felt as though his palate had bloomed.

After he left the fishing grounds he started my first small business as a butcher who specialized in processing meat for ranchers, hunters and anyone raising their own livestock at home.  This is where the seed of the Porterhouse sprouted. Periodically he got phone calls from newcomers in town who were looking for a good place to purchase really good meat and fresh seafood.  They would tell him that where they came from they had butcher shops that specialized in meat.  Here, they would tell him, there are only super markets and their meat is terrible! .....and so Porterhouse was born.

Dave opened shop in April of 2000.  "And to this day my pursuit hasn't relinquished to find the best food out there".  ~ Dave

It is with a very heavy heart that we announce that Dave Faulk, my father and the founder and owner of Porterhouse Market, passed away on Friday, December 28th from terminal cancer. He went peacefully with my mom Chris, by his side. He was diagnosed on November 29th, just one month before he passed away. The primary source of the cancer was never known but it was very aggressive, taking all of the energy he had. It was his wish to keep this news quiet, as he knew he didn’t have much time left with his family. However, he never lost his determination to keep Porterhouse going. My mom and I will become the faces of Porterhouse.

Dad built Porterhouse out of his passion for food and wine. His love and determination were the vision for building the finest deli and meat market in Eagle. As you all know, he was very successful in this dream as Porterhouse has been serving the valley for nearly 19 years. In sharing his love for food, he made countless friends in the process and we can’t tell you how much you all meant to him. He enjoyed sharing recipe ideas and getting to know each and every one of you, who were not just customers to him but friends and family.

Porterhouse was very special to him and he dedicated his life to making it what it is today. It is our promise to uphold the high standards that you have all come to know and love. We will continue his legacy with the goal of bringing you the highest quality foods from our ever-loving staff.

We want to thank each and every one of our loyal customers for keeping our dream in Porterhouse alive for the last 19 years. Without you we wouldn’t be able to do what we love so much. We look forward to growing Porterhouse as a family and honoring Dad's memory. We thank you for your support.

With love,
Hailey and the Porterhouse Family